Ahhhh…. Another election day has come and gone… THANK GOD! I don’t know about you but I’m sure as hell glad it’s over! I don’t watch much television at all but the last few weeks of TV have been absolute shit! Even if you’ve sat down for ten minutes and watched nothing but the news you know exactly what I’m talking about. Every other commercial is some political smear ad about a potential candidate allegedly cutting jobs or voting to raise taxes blah blah blah. Didn’t your mothers ever tell you that if you don’t have something nice to say don’t say anything at all? I mean come on, we learn this in kindergarten for effs sake! It really reminds me of watching children bicker back and forth. If only they spent half as much time informing us of the positive things they intend on doing as they did talking shit on one another… I tell ya. haha Ghandi said it best when he said “Be the change you want to see in the world”. I think these politicians need to take a page out of his book and learn a little.

Furthermore if I see one more person boasting about voting on facebook I think I’ll take the like button and shove it up their ass! ha Congratulations for performing your civil duty as an American. Here’s your cookie, good day to you sir! Now please be on your way. Seriously though, it is kinda annoying when I’m sitting in the can trying to find out exactly what that friend of mine from third grade who I haven’t spoken to in years is doing this weekend and all is see is I Voted buttons all over the friggin place. Can’t a facebook stalker have his peace without the clutter of this BS everywhere? Psssshhh

Welp, that’s all I’ve got for now. Asalamalakum my brothern! 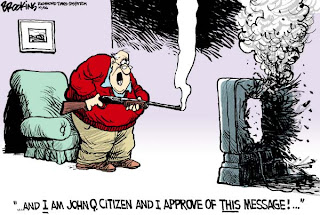